During in-person sales or author signing events, you can encounter an awkward situation. However, I think it’s something that every author should keep in mind in case they ever find themselves in a situation where they have to decide who should and who shouldn’t be reading the content of their books. Sometimes it will mean turning down a sale, even to someone who seemed eager to buy.

I’m talking about sex and violence in fiction stories.

There are some standard questions that come up about this topic, although they don’t always have standard answers. What age is too young to be reading sexual content? If we agree that erotica is intended for an adult audience, does that begin at age 17? 18? 21? What about a single sexual scene? Is 15 too young to read it? Does it depend on how graphic the scene is versus a fade-to-black? What about a homosexual encounter between two characters – do they require any additional consideration?

Violence is everywhere in entertainment. Movies, television, and video games are chock full of it. Which means that your average action scene probably won’t cause anyone pause, but what about horror stories? If you have a main character who is a sadist, how much or how little graphic description do you give to their exploits? How old should someone be to read a first-hand account of a blatant murder? What about a description of a dead body, where they discuss what actions must have been committed to causing the injuries in question?

Beyond age appropriateness, has there been thought given to the idea that the material could be disturbing to some? If a victim of trauma picked up your books, would they ever find themselves reading something that could resemble what they experienced? Do you include content warnings on your publicly available works, and if so, what do they say and where do you place them?

When I was a teen, YA didn’t exist as a genre. There were either kids books, or there were books. I was reading Timothy Zahn, Raymond E. Feist, Weiss & Hickman, A.C. Crispin, Terry Goodkind, Frank Herbert, and Phillip K. Dick beginning at age 13. Whatever content was in their stories, was in them. My parents didn’t think to censor what I was picking up. Once, I was accidentally given a romance book – with a not-so-graphic but graphic enough sex scene – in a pile of novels that my mother bought at a used book sale. (She might have meant to keep it for herself, I realize as I type this at age 32.)

Fiction doesn’t have ESRB ratings on the covers, so it’s understandable that when someone picks up a book, they won’t have too much warning about its contents. And no matter how common the content is for the genre, there’s always that ‘first book’ that we read – often not knowing what was in it ahead of time – where we suddenly encounter something we haven’t read before.

When attending in-person sales events with my authors, we run into this problem more often than you might think. A parent, eagerly picking up our books, talking to us about their teen who is always looking for something new to read. (We rent booths at comic cons and other such events, and while we’re not the only people selling books, we are in the minority.) And then the inevitable question will spill past their lips, accompanied by a hopeful look: “My kid is 13. Would these be okay for someone their age?”

Be honest. You will lose a sale in the short-term. In the long-term you will avoid reviews from angry parents.

Here’s what we say. “Probably no, but that depends on what they’re already reading. Sex isn’t graphically depicted, but there’s at least one scene in every book and it doesn’t fade-to-black.” And if they’re holding the series of vampire books that I’ve edited, we have to add, “The main character is, at the beginning of the story, an unapologetic sadist who murders people and enjoys doing so.”

I could talk about how those scenes are handled, but an adult who picks up our books would have full understanding of the nuances – that the sex is not just titillating, and the first-hand accounts of murders are from someone who is deeply disturbed and doesn’t know how to handle his emotions other than in a destructive manner.

What is impossible to know is at what age a teen is also able to pick up on those nuances. This is why we have warnings on our digital sales pages recommending our content for ages 16 and older. We also make use of Amazon’s reading age feature when uploading to KDP.

To illustrate the point that this is also something that happens even with internet sales, the vampire book in question once received a one-star review accusing the author of “living out their sick twisted fantasies” by writing them in the book. When we read that review – ignoring the absurdity of it – we thought that was the best content warning anyone could ever have put up. (Sadly Amazon removed it in one of their first review purges. We wished we could have contacted them to have it put back, one-star and all.)

Lastly, it’s worth mentioning that the sexual content – not the violence – is what gets a parent to put our books back on the table. Violence is so common in fictional media, many parents don’t even pause to ask about it. Not even as a follow up to a question about sexual content.

Things to take away from this post: Don’t worry about any of this while you are writing. Your stories are your stories, whatever dark, gritty, or tantalizing content is in them. Just be sure in subsequent drafts that those scenes achieve a larger purpose other than simply being there for shock value, or to be gratuitous or titillating.

Because one day you might find yourself in this position: I thought a buyer was purchasing a book for themselves. There was no discussion otherwise, so it seemed a safe assumption. After money and product changed hands, they stepped away from the table and handed the book to a kid. They were maybe 13 or 14 and probably loved Twilight or something. Before I could get the parent’s attention again, they were already moving on to the next place they wanted to be. The cover of the book in question features a serious-faced representation of the protagonist, holding his sword aloft, showing off that his name is stamped on the folded steel. And the back cover description only teases – honestly, but subtly – at what kind of monster the protagonist is.

I don’t know what happened later, and maybe the kid never read the book anyway. But that was definitely a moment where I would rather not have made the sale.

Have you ever paused and put yourself in the shoes of a reader, and thought about your stories in terms of the violence and sex that is in them? Do you think your stories are on par with the genre you write in, and if so, are you comfortable that your work might be the first place someone encounters such content? When working on second drafts, has there ever been a scene that gave you pause, and if so for what reason? The comments are always open. 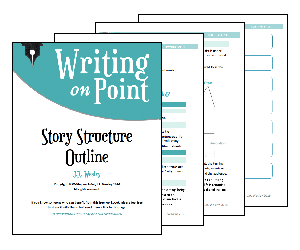